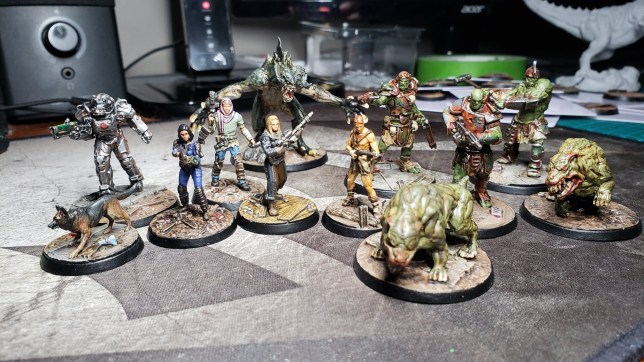 Fallout: Wasteland Warfare is not available on consoles

GameCentral looks at some of the best, and most unlikely, board game tie-ins, including a card game version of God Of War and Super Mario chess.

The sheer amount of board games on the market can be overwhelming, so it might make sense to start out playing a game that seems more familiar. Board games based on well-known video games can be a great introduction to the concept and a new way to enjoy your favourite franchise.

The commitment shown by board game makers in translating the original play mechanics and stories is commendable, but then often these games are made by players who love the original video game – so they end up being very faithful to the source material. With a similar price point you will probably get even more replayability from the board game version, making them great value for money.

The use of high quality video game artwork also helps and it feels great to hold physical miniatures of characters and enemies that you’ve only previously been able to interact with virtually. Board games give an opportunity to take these characters on new journeys and also to introduce them to your friends and family, who might not be as video game savvy. 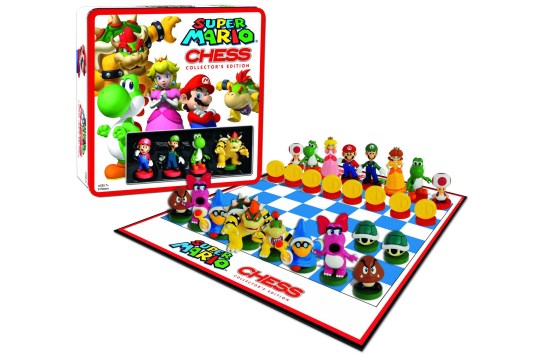 Luigi is the queen!

A great introduction to a worthy pursuit, even though it’s sometimes more Bowser’s Fury than the Queen’s Gambit when you mistake Princess Peach, who represents a bishop, for your queen. Luckily. the name of the piece is written on the base. Pieces are divided into good/evil, with King Mario vs. King Bowser and coins vs. Koopas. The chess board is very simple and folds conveniently into four, with a metal tin that acts as a cool display case.

The chess pieces are very high-quality plastic, including the Koopa pawns; the colours and detail are totally on point for the Mushroom Kingdom and your kids will love it. You could even play with the pieces as toys if you wanted to, making this set multi-functional and well worth the price.

Horizon Zero Dawn: The Board Game

Can’t wait for Horizon Forbidden West? Well, by the time you finish Zero Dawn: The Board Game it might have been released. This is a long game, so set aside a day with your best friend as this is best played with one other player. A semi co-operative tactical action game, it’s designed so you can immerse yourself in Aloy’s world, where sentient machines run wild.

For the board game though, the narrative has been put on the back burner in favour of action. You choose a tribe and a class to fight a variety of machines and pop-up events, until you take down a huge Sawtooth in a boss fight. The more Glory you obtain at the end of your hunt, the better your Sun Token will be. The player with the most points from Sun Tokens at the end of the campaign wins the game.

The quality and level of detail for the robot animal miniatures is worth the price, as they tower above your Aloy character – replicating faithfully the scale of the video game and your place in a post-apocalyptic world overrun by savage machines. 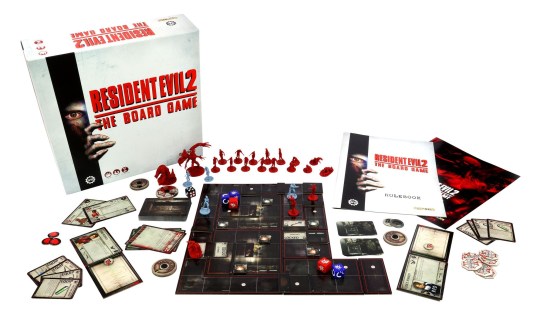 Ever been scared of a board game?

Resident Evil 2: The Board Game

Resident Evil 2 is a co-op board game that takes players through several scenarios inspired by the video game. Just like the impressive last gen remake, the board game takes us back to Racoon City, as Leon, Claire, and Tofu team-up as they attempt to escape the hordes of undead stalking the streets. There’s also plenty of other enemies to keep you on your toes, in the form of giant crocodiles, long-tongued lickers, and the seemingly invincible Mr. X.

Tread carefully though as, just like the video game, resources can be scarce and it’s easy to get overwhelmed. Don’t forget to leg it if you feel you might get overrun by the horde. 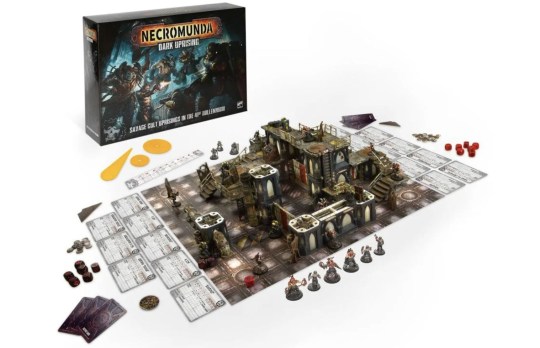 Maybe not the best one to start with

A hefty game with a hefty price tag! It’s hard to expect anything less than total domination from Games Workshop and this game has huge depth and some compelling storytelling and characterisation, built on the foundations of the Hive World introduced in the early 90s. The darkness and claustrophobia of the video game reboot Underhive Wars is captured in the plastic modular scenery (previously made from cardboard) and the price reflects the weight and quality of the accessories.

The huge box contains everything you need to play, including enough scenery to create a convincing hive in your living room. There are two complete gangs included – the twisted Corpse Grinder Cult and the indomitable Palanite Enforcers – and also a rulebook, cards, rulers, and some radioactive-looking bright orange dice. Building up your gang or enforcer patrol with battle experience and upgrades from mission to mission proves to be a lengthy commitment in a game that, despite price, does provide very good value for money. 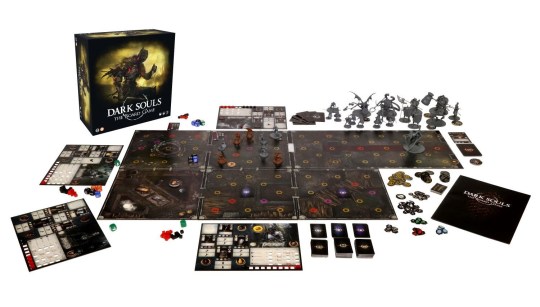 A miniature version of Soulsborne

Dark Souls: The Board Game

You Died. Just like the famously difficult video game, Dark Souls: The Board Game is relentlessly hard, just as the fans that helped raise $5million on Kickstarter wanted. Be prepared for some serious time commitment, as while this doesn’t take long to set-up it certainly takes a long time to beat, with lots of exploration and an impressive sense of foreboding and danger.

The monsters that inhabit this dark and complex world are punishing to fight and the boss battles capture the frustration and thrill that make the Dark Souls video games so successful. Manage your stamina and plot your strategy carefully, before facing any enemy.

However, your fate is often in the hands of the somewhat whimsical treasure deck and the items you receive and equip. This can be frustrating but there’s enough room for tactical play and changing enemy behaviour to counter this. Great to play solo, this is definitely a board game for fans of the video game, who won’t blanch at coming face to face with an impressively sized miniature of Executioner Smough. 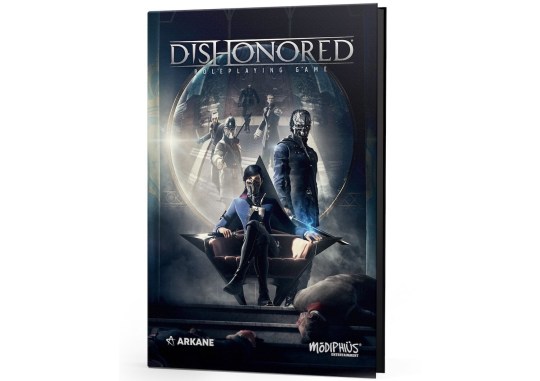 Who needs sequels when you’ve got a RPG?

Developed by London-based Modiphius, Dishonored is a tabletop role-playing game based on Arkane Studios’ video games and manages to convey, with suitable flourish, the sinister and decaying Victorian aesthetic of the video games. The rules come in a stunningly designed 300-page hardback book, which includes a wealth of information on detailed locations and the stories of their inhabitants. These details are a godsend for Games Masters trying to run an accessible campaign, while setting the scene and providing support for almost unlimited adventures.

Players can take on the role of a pre-made character or create an original one in the Empire of the Isles, the setting of Arkane’s stealth adventures. Complex and inspirational, the impressive world building gives this role-player a sense of agency and consequence. 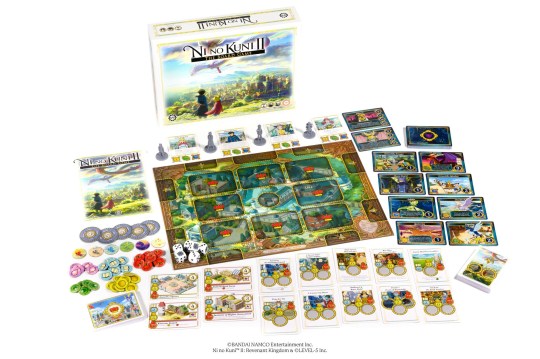 Ni No Kuni 2: The Board Game

If you miss your Revenant Kingdom, after building it up in the video game, this board game is a good way to immerse yourself in fond memories of time spent with the Higgledies. It’s a co-operative, luck-based game played over five rounds as your favourite characters, such as Evan, Roland, and Tani. You must complete quests, defeat monsters, and build up the kingdom in an effort to overcome Doloran and The Horned One.

It’s a fun, light intro to worker placement games for younger players, where you place characters, fight, collect resources, and buy and build things. It’s a stunning game, just like the Ni No Kuni games and the Studio Ghibli movies the game’s art style is inspired by. You might even take the time to paint the miniatures, to capture the vibrant world and cartoonish design.

Ni No Kuni 2: The Board Game doesn’t take a lot of time to setup and has just enough depth to fill an enjoyable afternoon. This is a great game for solo players, younger gamers, and fans of Studio Ghibli. 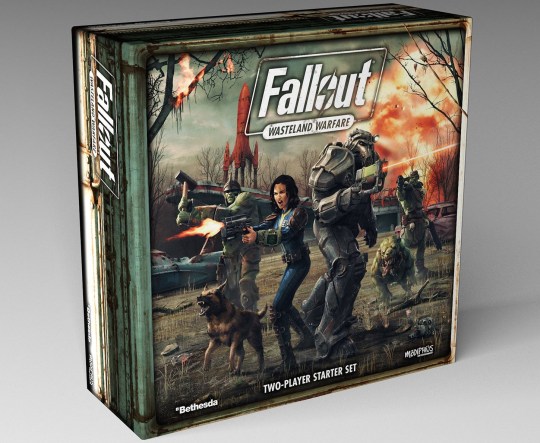 A Fallout game guaranteed not to have any bugs

Coming out of lockdown, you’d almost expect London to resemble a Fallout video game, full of wrecked cars and empty buildings. To prepare yourself for venturing outside, Fallout: Wasteland Warfare has you building your own crew from a selection of 32 miniatures belonging to a range of factions such as survivor, raider, super mutant, and Brotherhood of Steel.

The miniatures of these characters are well made and as soon as you invest in some terrain you can almost feel the radiation start to burn, as you travel through familiar locations, from the decaying Sanctuary Hills to the Red Rocket refuelling stations.

Fallout: Wasteland Warfare really feels like a Fallout video game with nuanced tactical play and plenty of exploration. The wargame format manages to present combat in a well-structured narrative campaign and while set-up may take a while it’s well worth it. As you commit to playing with a dedicated group though you’ll probably want to invest in additional character expansions or even a 3D printer and print them from the expansions available on the Modiphius website. 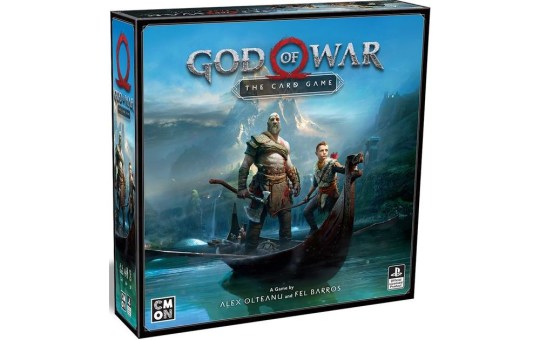 God Of War: The Card Game

What you playing, boy? In God Of War: The Card Game you take on the role of the Norns as you try different combinations of heroes and events in order to stop Ragnarök. A cooperative strategy game that uses deck building mechanics, you constantly add cards to your deck, trying to make it stronger to give you additional, and increasingly valuable and focused, abilities. You then have to use your hand of cards to fight through a series of quests and complete related scenes to fight a final boss.

The scenes are the foundation of the game and visually support the epic Norse narrative. Each scene uses eight or more cards arranged to build a picture, with a variety of interactive elements. The cards are double-sided and when enemies are defeated you flip them to change the story, which is a clever mechanic. A must buy for anyone impatiently waiting for more news on the new video game. 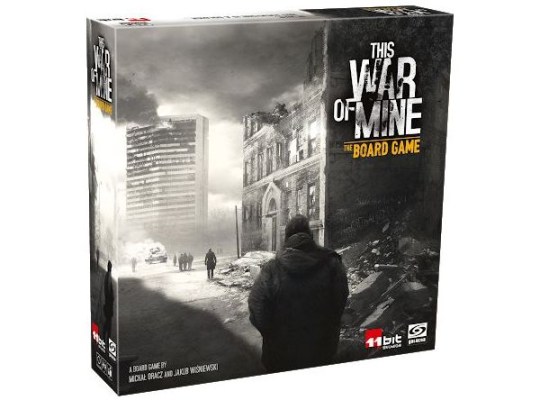 Not an obvious choice for adaptation

This War Of Mine: The Board Game

Not the most obvious video game to adapt as a board game, but it works surprisingly well. Inspired by the Siege of Sarajevo, you play as an everyday person trying to survive in a seemingly never-ending war. Just like the video game, you have to make impossibly difficult decisions just to survive, as you choose whether to give away your own food or take it from other survivors – knowing that they will likely starve as a result.

This War Of Mine: The Board Game takes the desolate and unrelenting nature of the video game and explores the survivors’ narrative through resource management and exploration, but in such circumstances the journey is neither quick (stretching to 6+ hours) nor easy.

The game art manages to capture the dark, gritty 2D aesthetic of the video game and creates an environment where serious tension builds during each round, with survival never certain but always hoped for.

Games Inbox: Is Uncharted: Legacy Of Thieves Collection a rip-off?

Not the best value remaster ever (pic: Sony)The Wednesday Inbox thinks a Zelda: Ocarina Of Time remake is a bad...

Cricket 22 review – no rest for the wicket