Wildermyth review – a legend in the making

The most innovative role-playing game of recent years is a low budget indie title where no story is ever the same twice.

The recent release of Cris Tales highlighted the difference between Western and Japanese role-playing games, and the long-standing question of whether they are two separate sub-genres or not. As with any modern genre debate the issue is largely irrelevant, since most games nowadays incorporate elements from multiple different game types. However, one key difference in the approach is how Western role-players are often much more focused on trying to replicate a tabletop role-playing experience – something which has always been much less evident in Japanese games.

As you might imagine, or otherwise we wouldn’t have brought it up, Wildermyth is purposefully reminiscent of the sort of freewheeling adventures you can experience with a good Dungeon Master, but it’s also much more than that. This isn’t some bookish attempt to replicate Dungeons & Dragons in video game form but an ambitious effort to make something unique in the annals of video game storytelling.

Wildermyth is without question one of the best games of the year, but with its non-descript name and lack of marketing – from a first-time developer, no less – it completely passed us by until readers began recommending it. It’s constantly becoming harder for indie games to be discovered on their own but the rewards for seeking out Wildermyth are quickly evident, in what feels like a genuine milestone in RPG gaming.

Things start off perfectly normally for a role-playing game, with a party of three characters that you can choose to either customise yourself or leave randomised. You then pick one of a handful of campaigns, with their own procedurally generated content, that take around 12 hours each to work through. Despite there being no pre-set characters everyone gets a little story intro explaining what they’re about, filled with personal details about dreams and interests and showcasing three unique personality traits, from greed to insecurity.

The script throughout is excellent – well-written but not self-indulgent – with comic book style cut scenes that convey the story and illustrate how the traits have a clear effect on its outcome. If your character has problems socialising then that will be reflected in the game, since relationships are important and the outcome of the plot, and your performance on the battlefield, can vary depending on whether characters are friends, enemies, lovers, or family members.

Characters level up in normal role-playing fashion, but they can also gain magical abilities as they progress, often related to their personality and taking the form of superhero style powers like flight or pyrokinesis. Whatever happens to your character though, it’s first and foremost treated as a plot point rather than something to be ticked off on your skill tree. Shorter comic book scenes pop up to detail each event and the effect it has on your party, from increasing morale to promoting feuds or causing characters to lose confidence.

Even if nothing drastic happens characters still gain permanent scars from battles or magic use and everyone grows old, often retiring to a non-combat role and allowing their children to take over. Each campaign is split into chapters that take place years apart, with your level of success determining whether the kingdom is at peace during that time – which has a knock-on effect on what your characters get up to in the interim. Reminiscent of The Banner Saga, you have to be careful that characters doesn’t burn out too soon, with veteran warriors more likely to get out while the getting is good than continue on into old age and inevitable defeat.

Wildermyth is heavily focused on telling a characters’ entire life story, not just a one-off adventure, and whether you lose them to battle, old age, or ennui it’s always an emotional send-off. However, even if a character dies mid-campaign they can return in another, often de-aged or slightly less powerful, as you add them to an in-game hall of fame that sees their legend retold time and again.

All of these story and character elements are reflected in the combat, with age and experience determining abilities just as much as the weapons being used, while relationships to other characters opens up a range of different abilities depending on whether they’re lovers or rivals.

The turn-based battles are played out on grids not dissimilar to XCOM et al., with the basics being no more complicated than move and attack. Like the rest of the game though, what at first seems relatively ordinary is soon revealed to be full of nuance, especially the magic system which works by fusing the properties of ordinary background objects. Stone can used to increase defence, fire can be manipulated as a weapon and a barrier, and any wooden object can be turned into a literal splinter bomb.

The depth increases as your characters learn new abilities, and the scenarios become more complex, but one of the most interesting elements is that the game also grants new abilities to enemies over time, giving them new buffs and powers at the same rate as you gain them.

Despite the simple, papercraft style visuals the characters in Wildermyth feel more real than in games with a hundred times the budget and graphical realism. Even if a video game looks photorealistic, until we have advanced artificial intelligence that wants to play the role of Dungeon Master characters (instead of destroying all humans) games will always require you to fill in the gaps in a character’s personality, especially if you’re playing anything other than a linear adventure. 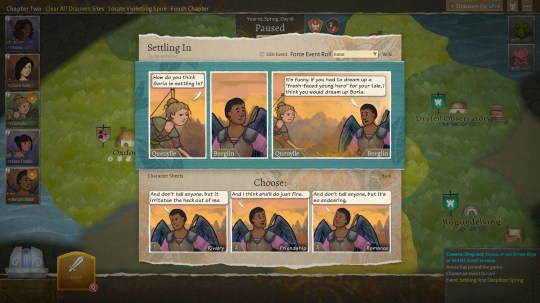 The main fault in WIldermyth is that, inevitability, repetition does being to set in sooner or later, since there’s only so many scenarios and plot points that can be mixed and matched until the same ones pop up again. They’re always modified by the traits of your character, to the point where you never see exactly the same thing twice – but you will something similar often.

And while the game is not especially difficult by default, the final chapter can often seem impossible if all your characters have grown old and their apprentices have not yet matured. That is your fault, as a player, but it’s still a very anticlimactic way to end things.

Unfortunately, there seems little chance of a console version, as developer Worldwalker Games made the game using a custom engine based on an obscure version of Java. Although they want to do a console port it would apparently take a ‘major effort’, that will only be cost effective if the game is successful. Which is one more reason to hope it is.

We only heard about Wildermyth from the recommendations of others and so hopefully that word of mouth will continue, and this budget-priced revolution in video game storytelling can be appreciated by everyone.

In Short: A revolutionary approach to storytelling and an excess of charm makes this modest little indie game one of the most important new role-players of the new generation.

Cons: Plot elements do begin to repeat themselves if you play the game enough. Final chapters can often seem unwinnable if you’ve only scraped through to the end.