‘I’ve beloved seeing my children study to ski’: the magic of household snow | Come residence to the slopes

The first time we took our elder son skiing was not a great success. We’d talked up the trip for weeks, raising his three-year-old’s expectations to fever pitch. Then proceeded to try to leave him in ski school with teachers and children he’d never met before; his unhappiness was palpable.

The only way I could get him to stay on the magic carpet – a moving walkway that pulls skiers uphill – that first morning was by tearing off pieces of pain au chocolat and administering them to him at frequent intervals, much to the irritation of the instructors who understandably want parents to drop off their kids and leave. 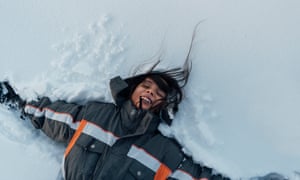 A couple of years later, we tried again. This time we had his younger brother in tow, and he brought a puppy-like enthusiasm for snow to proceedings. He pawed at it, ran and jumped in it, sometimes even ate it, and this joy proved contagious. They both went off to ski school without complaint and seemed to revel in the experience.

Each afternoon, they’d proudly show off their skills to us on the nursery slope, but impressive as those newly linked turns and the ability to use a button lift were, we only really cared that they were buzzing with excitement and had a sparkle in their eyes we hadn’t seen before. 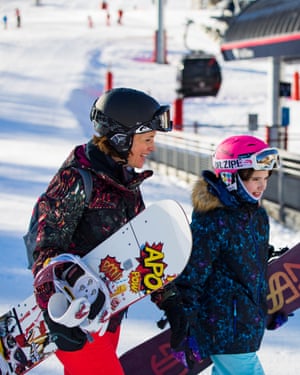 For my partner and me, it’s never been about raising a Bode Miller or Chemmy Alcott, inspiring as those highly talented skiers are. We just want to bring up kids who love being in the mountains as much as we do, with the added benefit of that easy-going confidence you can only achieve when you learn something so young that you can’t remember ever not being able to do it; my husband and I only learned to ski, or in my case snowboard, in our early 20s.

Our parallel goal was that we would be able to enjoy snow trips as a family as the boys grew up. Five years on from that first successful ski week, I can certainly say that’s proved the case. And given how hard it is to find a holiday that pleases each member of the family equally (we love theme parks about as much as they love guided tours of vineyards), that feels like no mean feat.

Some of our favourite family memories have been forged in ski resorts. The time we skied from France to Italy for a pizza lunch, and it blew their minds that we didn’t need passports, or when we had a picnic on a snow-covered rock facing Mont Blanc and they asked if they could ski down the mountain. The day we took them on their first red run, and their first forest trail, or when they first experienced skiing through a horizontal blizzard – and, afterwards, the rejuvenating power of a hot chocolate beside a blazing fire.

There was also the moment we spied animal tracks from the chairlift, or when I spotted some powder on the piste and headed off for a few turns, only to realise they were both behind me like grinning shadows. All the times they felt scared but overcame it. The snowball fights, the sliding down slopes on saucer sleds, how bad we all were at ice skating. And even one I’d prefer to forget, the time I breezily suggested they try skiing through steep moguls – snowy mounds on the piste – and the youngest twisted his knee. Though he does still talk fondly of his friends in the mountain rescue team.

I’m hopeful we’ll ski again soon, and the shared family good times will continue to roll well into their early adulthood. I take comfort whenever I see older teens enjoying mountain lunches or chairlift chats with their parents, even if the teens then bolt off at the top of a run to hit the snow park, while the adults opt for a more relaxed route down. We might be those people, or we might be the family that gets a guide and takes on new and challenging terrain. Who knows what the future will bring. Now aged eight and 10, mine can already beat me on a ski cross circuit – a specially designed course with jumps and banked turns – and jump higher than me in the snow park.

I normally ignore my phone when it pushes old photo montages at me. The exception being when I see shots of snowy white landscapes and bright blue sky; these are always the images that make me pause and draw me in closer. I’ll look at those earlier versions of ourselves, the helmets, the goggles, the beautiful backdrops, where we’re often smiling, always frozen in time, and I’ll feel uplifted by the memory.

And I wonder, with each passing year, if this isn’t when we’re at our happiest as a family, our most together and most alive.

Hit the slopes
Book your space on the slopes at crystalski.co.uk

Tags: Come home to the slopesfamilyhomeIvekidslearnLovedmagicskislopessnow