Swap a holiday abroad for a wild adventure in Perthshire, Scotland

If there’s one silver lining to this whole pandemic situation, it’s been having the time to explore remote parts of the UK without the nagging feeling that a break not spent turning paper bag-brown on a Portuguese beach is a wasted one.

Had you asked me 18 months ago whether I’d be keen for a mini break in some remote corner of Scotland in mid-June, I’d have laughed while opening my SkyScanner app.

But in 2021, with the traffic light system in full flow and tales of quarantine to scare even the most determined of travellers from flying, slow, local travel is king. And I, for one, hope that it’s here to stay.

In the middle of a heatwave that had seen me pouring with sweat minutes after leaving the shower, I took off on a 6.5 hour train journey (courtesy of LNER) to Penloch – an area just north of Perth.

At York, plenty of human lobsters got off the train. Edinburgh even had a few pink faces on the platform. But as we moved further and further north, it was clear that some parts of the UK hadn’t experienced the same kind of back-sweat-inducing heat that we Londoners had. Everything was getting greener, more lush and dramatic.

As children, my dad used to take us on holiday to Spain and Portugal on a coach from Victoria station – a 36-hour extravaganza of sandwiches, nearly-missed buses and oddball passengers.


Even the journey up north is a treat (Picture: Miranda Larbi)

Despite the slight discomfort, the journey was like a holiday in itself; you got to see the changes of landscape and unwind from the stresses of school before reaching the final destination. These days, it’s cheaper to fly but I’ve really missed having that extended transfer window for relaxing ahead of the place I’m actually holidaying at. By the time we reached Penloch, I felt like I’d been on holiday for some time.

The Dunalisair Hotel is situated at Kinnoch – an extraordinarily pretty town which one friend described as being ‘something out of a Disney film’ in response to my Instagram story one morning.

Its babbling brook, bouncing lambs and lime-green mountains no doubt provided a welcome break from pictures of scorched skin and #haggerstonriviera content. 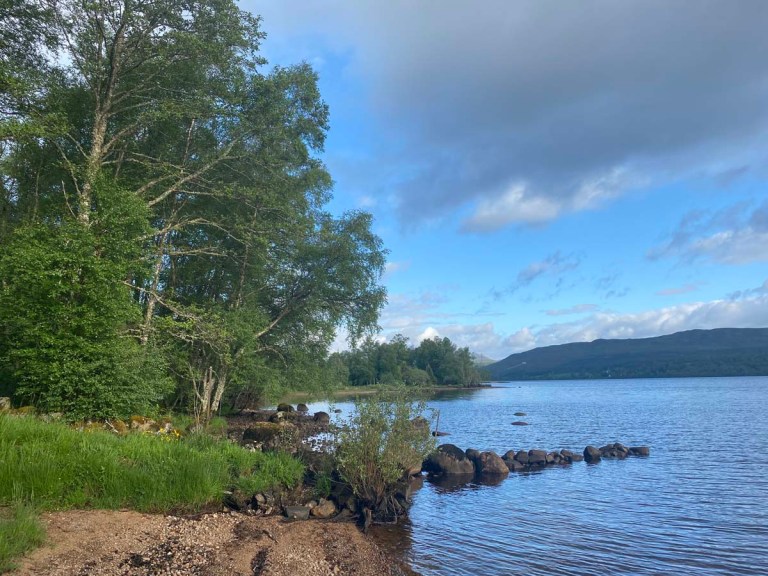 There’s something so peaceful about escaping the city and immersing yourself in nature (Picture: Miranda Larbi)

It sits a stone’s throw away from the loch and a magical-looking waterfall. Creep down the road in the early morning and the birdsong is so loud and varied that you won’t be able to hear your podcasts for the musical ruckus. Given that your main company is the wild deer and rabbits at that time, it’s probably better that you do have your wits about you.

The day after arriving at Kinnoch, we went for an early morning mindful walk with the incredible Melanie Santorini.

Melanie is a former Church of England vicar-turned-‘barebreasted priestess’-now-local-healer who runs retreats in the forest by the loch. She’s the kind of person who looks like the sun is shining out of their face so there must be something in the meditation and appreciation that she practices.

Under her instruction, we walked silently into the forest, concentrating on the plethora of green surrounding us, the squelch of the forest bed under our feet and the avian orchestra playing above our heads. 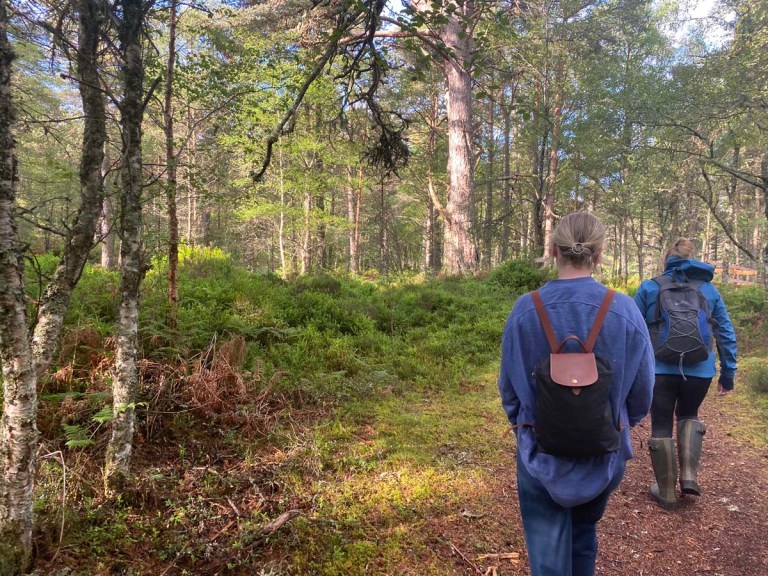 Our group walked silently out into the forest to take in the sounds and sensations (Picture: Miranda Larbi)

About 25 minutes in, we stopped and were asked to partner up ahead of being blindfolded and led through the forest unseeing. The smells got richer, the sounds more acute.

After a year spent under lockdown with masks and anti-bac, being totally ensconced in nature – forest bathing in the richest landscape – felt magical. Our walk culminated at the Grandmother Bones tree, a huge, dead-looking cathedral of a tree, with arms draped in ribbons.

At its foot, Melanie laid a little altar with a pot of water and incense to symbolise the three elements coming together. I tied a green ribbon to a branch and came away feeling calm, collected and at peace.

You don’t have to be especially spiritual to feel connected with the earth up here; it simply requires unplugging and opening your senses to the sensations, smells and sounds that nature creates. The lungs expand, the mind calms and the body feels re-energised. 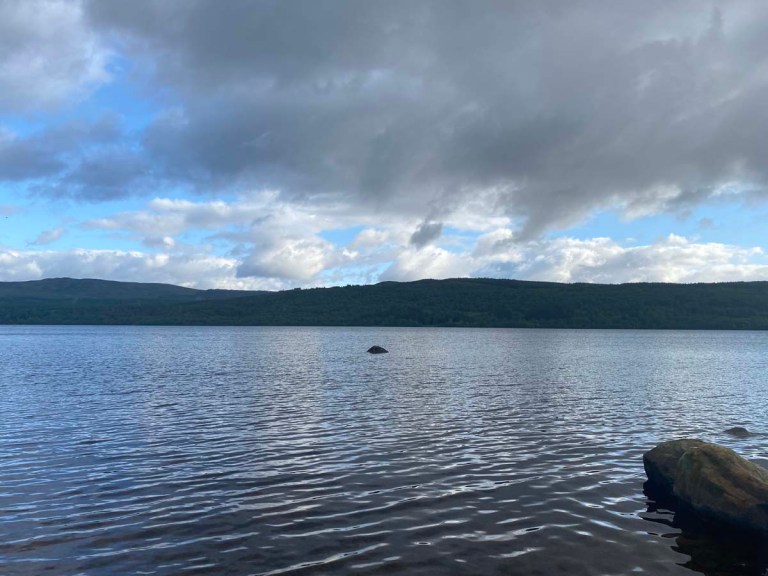 By the time we got back to the hotel for breakfast, I felt like I’d done hours of grounding and refocusing… when in actual fact, we’d only been out for about 90 minutes.

Kinnoch is the sort of place where you could spend the day walking or cycling just as easily (and arguably more enjoyably) as taking a car tour. The only thing about walking is that you may miss the extensive history and tidbits that you can only get from a local.

We decided to take the minibus tour option with Highland Travel, which saw us driving around the loch and up to various local beauty spots – accompanied by a compelling commentary on the various murders and massacres taken out by the Jacobean warriors back in the 1700s. What looked initially just like a field soon became a battlefield from which the Camerons smuggled sheep or another tribe ambushed and beheaded whole armies. 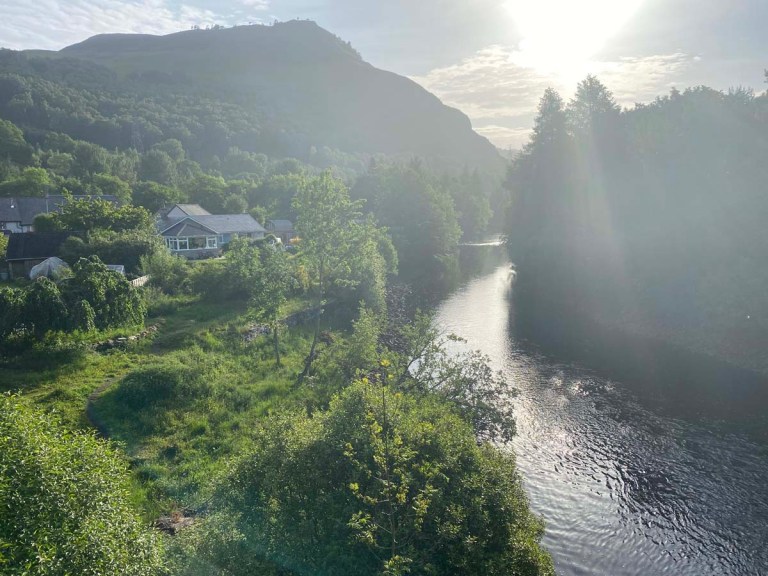 Moving in any direction will leave you feeling refreshed (Picture: Miranda Larbi)

Slow travel means trying to be as low carbon and appreciative as possible. Tours in a mini bus make sense if you’re travelling with a group; they’re also great if you’ve not got great mobility or simply want to explore a greater section of the countryside.

There’s no one place I’d recommend visiting – the whole area is so impressively wild and vast that moving in any direction will leave you feeling refreshed.

That said, if you didn’t visit Rannoch Tea Rooms, you’d be missing a trick. Known as the ‘probably the remotest tearoom in Scotland’, this tiny, picturesque cafe serves a selection of delicious, home made breakfasts, lunches and tea time meals and snacks – including vegan and gluten-free options. I had a vegan ice cream sundae and really struggled to walk afterward, such was its size.

Talking of vegan grub, it really is amazing how even in these sparsely populated corners of Scotland, excellent plant-based options exist as standard.

At the hotel, we enjoyed a seven-course taster menu (perfect for weddings or incredibly boogie birthdays) and I can safely say that the vegan option was as good – if not better – than the standard options. Beetroot carpaccio, cucumber refreshers, sweet potato soup, poached pears – it really was excellent. I’d go back just to eat that meal again.

Turns out that Scotland in the summer really is worth sacrificing a heatwave.

Rooms at Dunalastair Hotel start from £189 per person, per night – including breakfast.

The brilliant Melanie is running three night retreats in partnership with Dunalastair Hotel. They’ll be taking place November 12 to November 15, 2021, and Janurary 13 to 16, 2022, and will include sleeping at the hotel along with various bespoke mindfulness experiences in the surrounding mountains, hills and lochs. More details on how to book will be on the hotel’s website in due course.

We toured with Highland Travel, a company that offers private guided tours across Scotland and also bespoke private hire taxi services in and around Rannoch. Find out more at www.highland-travel.co.uk, email [email protected] or ring 07971 540282.

Our stay at the Dunalastair Hotel was gifted for the purpose of review.